On March 17, 2016, the Matilija Dam "Design Oversight Group" met to determine consensus around one of the three alternatives in the AECOM/Stillwater reports and how to move the project forward.

Following a long discussion, the issue was put to a vote.  Printouts depicting the three project alternatives were hung on the wall, and each stakeholder was given a green "stickie dot" to indicate their preference.  (A yellow dot was provided for a "backup" 2nd choice, if they chose to do so.) 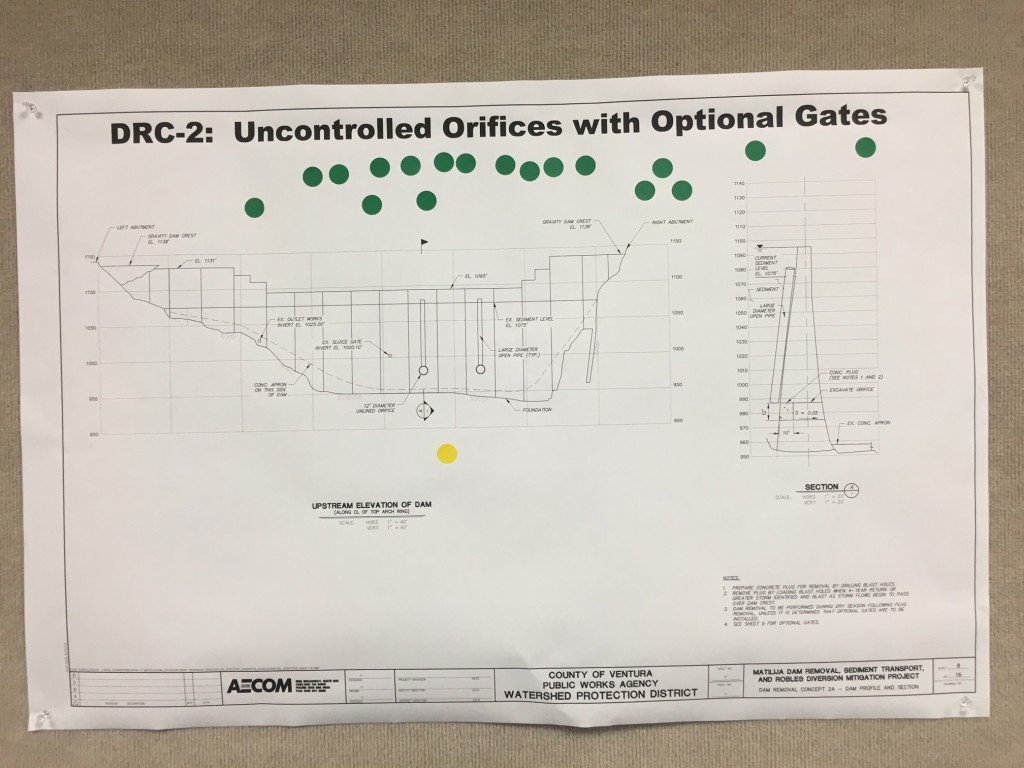 The result was almost unanimously (95%) in favor of Dam Removal Concept 2:

This outcome was not unexpected, given the discussion during the previous meeting last September.   However, this is a very significant decision in that marks a departure from almost 15 years of discussion in which sediment was seen as damaging to both local interests and the river, and in which the Corps of Engineers was perceived as the only path to funding the project.  This vote included the local water districts, the City of Ventura, resource agencies including NOAA, Fish and Wildlife Service, State Dept of Fish and Wildlife, Army Corps of Engineers, as well as Matilija Coalition member organizations.  This method of releasing sediment through a low level outlet was demonstrated on Condit Dam in 2011.

The meeting agenda included discussion of the alternatives developed in the final reports and the potential funding pathways to complete the project.

This chart was presented as an outline of the processes required to complete the project.  It is assumed that Alternative 2 would be pursued as a local project, depicted by the green path, as this dam removal concept is significantly different from that which was previously authorized through the Corps of Engineers.

Much talk was centered around the difficulty in funding a Corps of Engineers project given the current political climate.  Congress has restricted "new starts," and the Office of Management and Budget has kept with its determination that, when it comes to a locally owned facility such as Matilija Dam, the federal interest is limited.  In hindsight it is clear that delays in the project resulted in a missed opportunity following authorization through WRDA 2007 (the Water Resources and Development Act is the mechanism for Congress to approve Corps of Engineers projects nationwide.)

This sentiment was confirmed in discussions with congressional representatives and appropriation staff during a recent trip to Washington sponsored by Patagonia as part of their DamNation campaign to gain support for the removal of "Deadbeat Dams."

The project selected is by far the most cost effective means to remove Matilija Dam, and is free from congressional roadblocks.  However, despite less than $20M cost for dam removal, the total price tag will likely include tens of millions more in downstream projects previously determined necessary to accommodate restored sediment flows down the river.

The next step is to identify and secure funding to complete the necessary engineering and environmental permitting to get the project "shovel ready."  This work will likely take another couple of years.  In the mean time, Patagonia has been appointed to lead a funding subcommittee to help secure funding for project implementation.

More info:
matilijadam.org: the final Dam Removal Concepts and Water Supply Mitigation Options reports are posted to the website.  They contain final changes to the reports, mostly in response to comments submitted by members of the Design Oversight Group.