Matilija Dam – Studies and Next Steps

On September 17, 2015,  the Matilija Dam "Design Oversight Group" met to receive a presentation from the consultant team and discuss the next steps toward removing the obsolete dam from the Ventura River. The meeting was well attended by local, state, and federal agencies and interested locals.

Background:  In 2012, the California Coastal Conservancy agreed to sponsor an independent study to find a way to manage the fine sediment trapped behind the dam.  These studies are now complete, and are available at matilijadam.org

The good news:  Three dam removal concepts have been developed that resolve the issues that stalled the project in 2008.  Each of these alternatives greatly reduce the cost of the project and enhance the long term benefits of dam removal.  These are described below.

What's Next for Matilija Dam?

Ventura County has solicited comments from the stakeholder organizations and government agencies that make up the Design Oversight Group.  The group will meet again before the end of the year - hopefully there will be agreement on a path forward so we can take the next steps necessary to remove the dam in a reasonable time frame.

The consultants underwent an exhaustive initial screening process to consider the whole spectrum of dam removal concepts.  The team ultimately agreed to carry three alternatives forward for more detailed analysis.  This work was presented last year at the Matilija Dam meetings May 28, 2014.

The three concepts are as follows:

Dam Removal Concept-1: Containment Berm with High Flow Bypass
The primary objective of this dam removal concept would be to use one high flow event, having a minimum average daily flow of approximately 1,700 cubic feet per second (cfs)4, to quickly erode and transport as much fine sediment and organic material as possible out of the reservoir and through the downstream reaches to the ocean.  The dam would be removed by diverting the river into North Fork Matilija Creek through a tunnel in the mountain to dewater the reservoir.  The next big flood to occur would then create a natural channel and flush the sediments downstream and out to the ocean.
Cost: $40.4 million 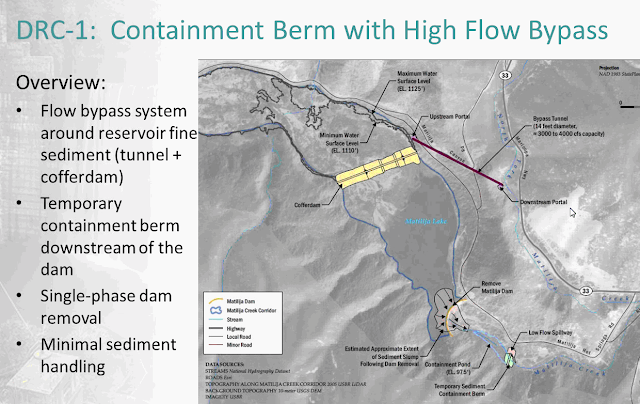 Dam Removal Concept – 2A: Uncontrolled Orifices/2B: Optional Gates
The objective of this dam removal concept (DRC-2A) would be to erode and transport as much fine sediment as possible from the reservoir, while minimizing costs and time associated with large bypass/containment structure construction and sediment removal. The fine sediment mobilization would be achieved by allowing flow through two uncontrolled orifices, whose opening would be coordinated to coincide with a sufficiently high flow event (as summarized for DRC-1). The orifices are sized to pass the minimum high flow event in an unpressurized condition and are located to maximize mobilization of the reservoir sub-area sediments from the upstream face of the dam.
Cost: $18.5 million (2A) or $20.4 million (2B)

Although it may seem like a bold proposal, this has been done before.  See Watching the Dams Come Down - Condit 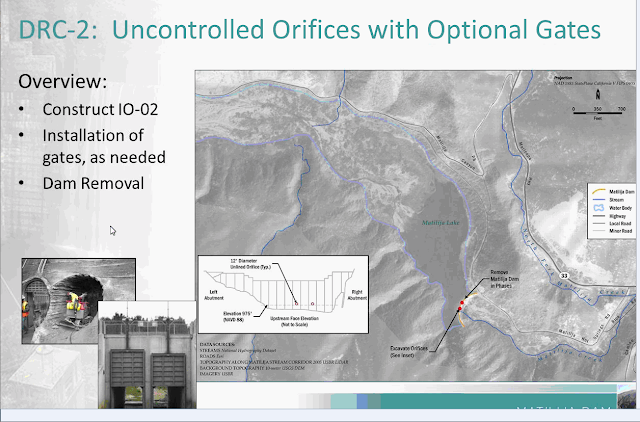 Dam Removal Concept – 3: Temporary Upstream Storage of Fine Sediment
The objective of this dam removal concept is to provide a concept that optimizes the Federal project (EIS/R Alternative 4b) but reduces the volume of excavated sediment and eliminates the need for a dredge-and-slurry system. These objectives are achieved by handling and temporary stabilization of a portion of the accumulated sediment within the reservoir and allowing limited release of a portion of the accumulated sediment. The dam would be demolished and removed during the final season of channel excavation, with the goal of providing limited fish passage through the site immediately after dam removal.
Cost: $49.7 million 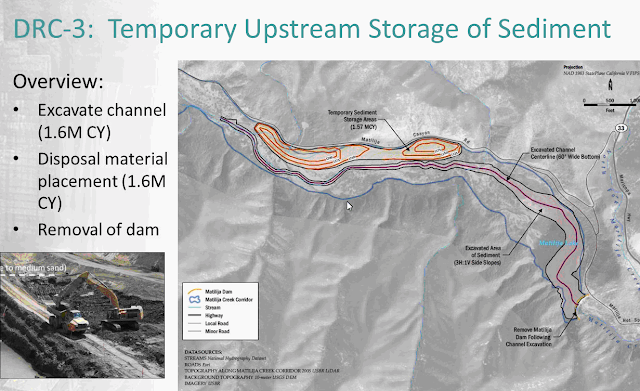 Evaluation of Dam Removal Concepts:
DRC-3 is effectively a refinement of the project developed during the Corps of Engineers Feasibility Study from 2000-2004.  (see Matilija Dam poster.)  The current studies were conducted because the cost of sediment management for the preferred Alternative 4b had escalated to approximately $113 million (in 2015 dollars.)  The DRC-3 concept presented here reduces sediment management to approximately $49.7 million by eliminating an expensive slurry pipeline and over 70 acres of permanent downstream disposal area.
Dam removal concepts DRC-1 and DRC-2 are intended to minimize the duration and associated high turbidity impacts to downstream water diversions and ecology by concentrating the majority of fine sediment erosion and transport into a single storm event.  In other words, the majority of the fine sediment would be intentionally flushed out during a single flood.
These are essentially "Natural Transport" alternatives, intended to make use of the high energy that the Ventura River exhibits during large winter storms.  During the first high flow, Matilija Creek would cut though the sediment deposits upstream of the dam and create a channel similar to that which existed before the dam was constructed.  The creek would then be constrained by the high walls on either side and much of the sediment would remain in place for many decades into the future. 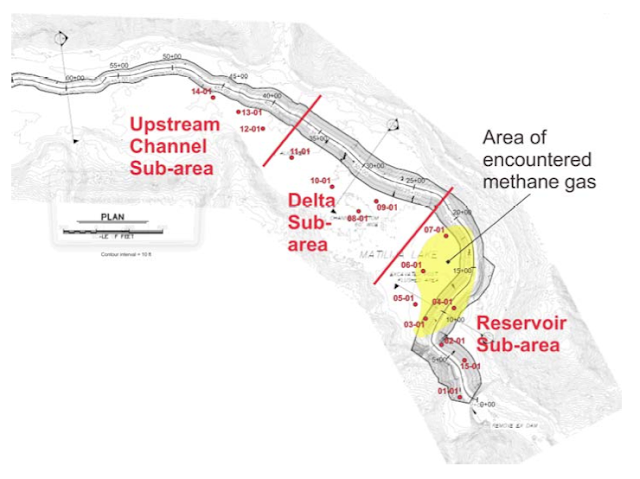 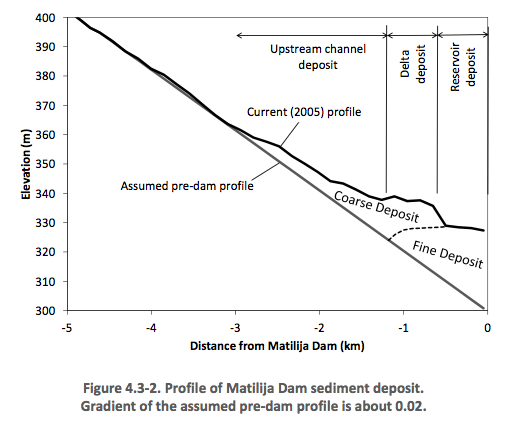 Erosion of sediments from behind the dam is now understood, from theory and practical experience, to occur in two phases as shown below: 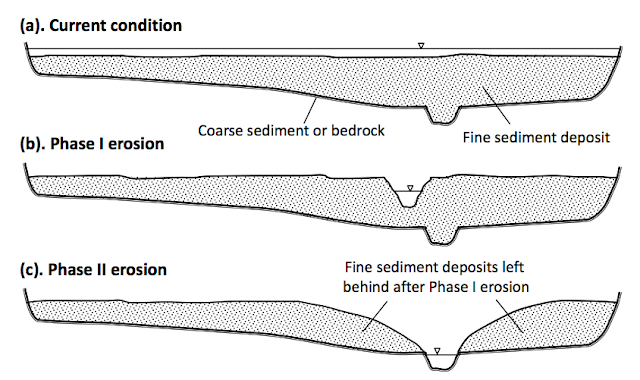 From an initial, unchanneled condition, “Phase I” erosion occurs as the river cuts a channel into the fine sediments in the Reservoir and Delta sub-areas.  “Phase II” erosion occurs once the creek erodes down to its historic channel and fine sediment is no longer being directly mobilized by the flow.

Under these dam removal scenarios, all the Phase I erosion would occur during the first flood.  The analysis concludes that this event would create extremely high sediment concentrations in the river downstream and all the way out to the ocean.  However, this condition would only last for about a day while the river is cutting down into the sediment.  Once this channel is established, all future floods would result in Phase II conditions, in which sediment concentrations are approximately the same order of magnitude as existing conditions for flooding in the Ventura River watershed.

How would this affect steelhead another aquatic life in the river?
The figure below indicates severe effects, perhaps 60-80% mortality for steelhead downstream. However, other dam removal projects on the west coast have shown that, in the real world, steelhead and salmon that have been blocked by dams for generations are able to hide out in clear flowing tributaries and then almost immediately find their way upstream, sometimes within days of such an event.  If you think about it, fires and floods historically created just such conditions in natural watersheds where native fish evolved. 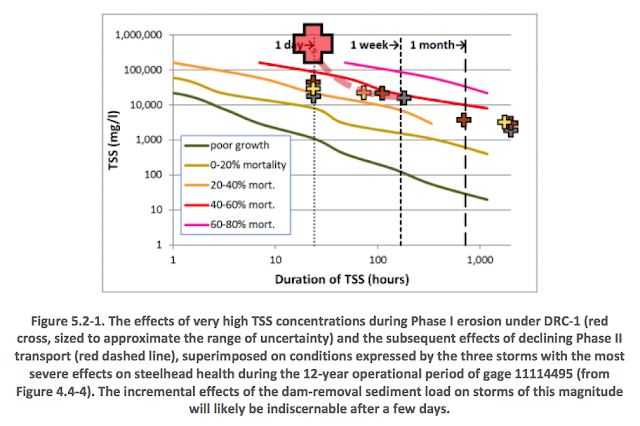 How much will the complete Dam Removal project cost?
A preliminary "Range of Magnitude" cost comparison of the sediment management concepts are presented in the table below: 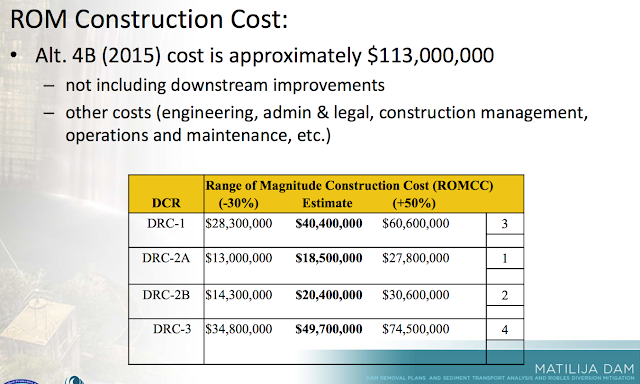 Note that these costs do not include the downstream mitigation components identified in the 2004 Feasibility Study including levees, bridges, and water supply infrastructure improvements. This could be an additional $50 million or more, making DRC-3 a $100 million project.  On the other hand, DRC-2 reduces sediment management to $18.5 million making it perhaps less than a $70 million project.  Note that all these alternatives will require additional engineering and environmental analysis.

How long will it take?
The key to the natural transport strategy in this drought-and-flood environment is to set up the project and “wait” for a high flow event.  Although the current drought seems like forever (4 years), historically we have experienced a median of two years between high flow events. 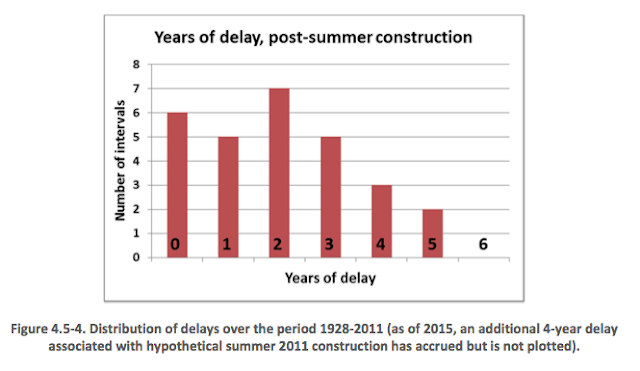 Each of the alternatives considered would achieve dam removal and a free-flowing river within 2-5 years, although DRC-1 may take up to 6 years due to the additional construction and risk.  (Note that this is the time AFTER additional engineering design and environmental analysis and permitting has been completed, which will be several years at best.)

Which alternative is best?
The three alternatives were ranked based on the cost, risk, and benefits and impacts to habitat and water supply.  Largely because of it's simplicity, the orifice concept comes out on top: 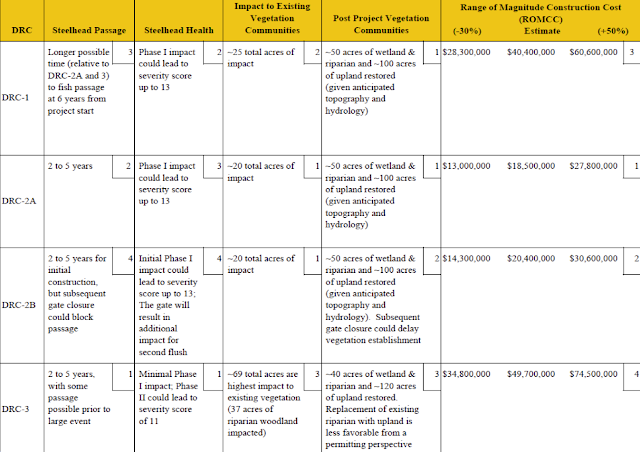 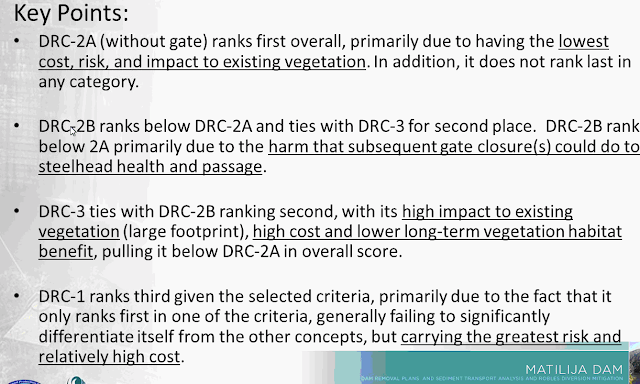