Local Heroes – Keeper of the Coast 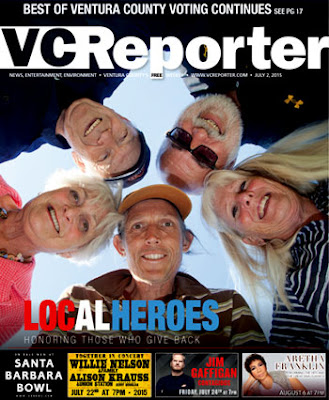 Local Heroes honored in the July 2, 2015 issue of the Ventura County Reporter include Paul Jenkin, "Keeper of the Coast."  The article highlights Paul's work as the "environmental guy" with the Ventura County Chapter of the Surfrider Foundation including Surfers' Point, Matilija Dam, and projects aimed at restoring the Ventura River watershed.

Paul Jenkin, the “environmental guy” in the Ventura County chapter of the Surfrider Foundation, grew up traveling, a citizen of the world. He began surfing in Florida during college, where he earned bachelor’s and master’s degrees in ocean engineering.

In 1989, Jenkin, who currently resides in Oak View, moved to Ventura County to work for a Navy contractor but his concern about the environment only intensified.

“Believe it or not, in the ’80s and ’90s I was really concerned about climate change; and seeing what was going on, I was driving myself crazy,” he stated.

His wife advised him to take action and he adopted what has now become his mantra: Think locally, act locally.

“You can’t solve the world’s problems, but locally you can effect some positive change and that’s what I set my mind to do.”

The Surfrider Foundation was founded in 1984, and its global chapters are dedicated to the protection and enjoyment of oceans, beaches and waves. All chapters are run by volunteers. At the Ventura County chapter, Jenkin is the Ventura campaign coordinator, aiding in the management of existing campaigns and monitoring current issues.

Most notably, the Ventura chapter was involved in the Surfers Point Managed Shoreline Retreat project, which tackled worsening coastal erosion and a crumbling bike path at Surfers Point.

According to Jenkin, one of Surfrider’s key functions is not only providing a voice for local activists who are concerned with coastal issues but also offering a way to create real change.

“As keepers of the coast, when you’re educated and aware of what’s going on, I think you have a duty to call attention to the issues that affect the coast,” he explained.

For example, the Matilija Coalition was founded in 2000 to enable collaboration between individuals and organizations regarding the removal of Ojai’s Matilija Dam. The structure promotes the erosion of beaches and decline of fish because it hinders flow of the Ventura River into the ocean. Matilija Dam is the biggest dam at over 200 feet to be considered for removal in the country.

Today, the dam still stands but Jenkin hopes removal will happen within the next decade. He’d also like to see more people become increasingly informed, stating that education programs intended to enhance public awareness on issues facing the coast are also a priority for Surfrider.

Consequently, he produced the film Watershed Revolution with National Geographic photographer Rich Reid. It aired nationally on PBS, on local cable and was not only screened locally but in several film festivals.

“We wanted to build awareness that our local watershed sustains us and there are many people in the community committed to protecting and restoring the Ventura River. We hoped to inspire people to get involved.”

Besides remarking that better water management is crucial. especially during a drought, he advises choosing a relatable cause, then moving forward and slowly making a difference.

“We are all environmentally conscious; it just depends whether we act on it or not,” Jenkin said.

For more information, go to http://ventura.surfrider.org.