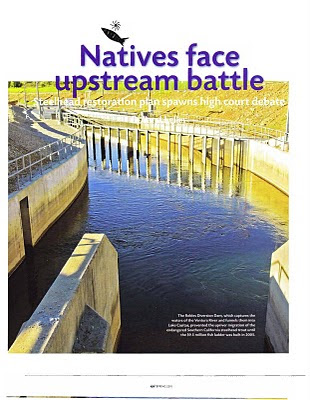 An article in Ojai Magazine investigates the plight of the Ventura River steelhead and the latest on the high court debate over Casitas Water District's claim against the federal government.

"The principal question before this court is whether the government's permanent physical annual taking o f 3,492 acre- feet of Casitas' water is compensable under the Fifth Amendment and, if so, the amount of just compensation," according to a brief filed by Casitas in January, following an October trial in Washington. The judge's decision in the case, which is expected by the summer, could not only award Casitas tens of millions of dollars but, as a precedent, prompt other local agencies to sue for payment for water lost to help other endangered fish. In this case, Casitas wants the federal government to pay $87.3 million, plus interest and attorney fees, for rain runoff water Casitas diverts down a 100-yard , metal fish ladder to help save the Southern California steelhead, an ocean-going variety of the common rainbow trout.

"This is Casitas' water to use [but] Casitas does not have it any more," Washington attorney Roger Marzulla wrote in his brief on behalf of the water district. "The fish do."

Federal officials argue that Casitas has only limited rights under it s state water permit and has not lost a dime in sales by providing for the steelhead migration, ...and Casitas has not bought any replacement water.

The state of California, meanwhile, insists that it owns the water used for the steelhead and that Casitas is only a licensee to which it grants water rights for the public good.

Coultas, (former CMWD board member) in fact, testified that he never saw a steelhead in the Ventura River during his 20 years on the Casitas board and a lifetime as an Ojai area fisherman. "I've never seen one in person," Wickstrum said. Baggerly said he had seen just one, "and it was a big one."

Below the three dams in the Ventura River watershed, experts say, there are still scattered adult steelhead and many more juveniles. ...Paul Jenkin, founder of a coalition to remove the silt- filled Matilija Dam, said steelhead are often found in pools ... "Our count is very important when discussing an endangered species about which very little is known. There are people out there who say there are no steelhead left. And if no one is out there looking, you don't know if there are."

Jenkin insists that removal of the obsolete Matilija Dam would open a floodgate of steelhead migration up and down Matilija Creek to the Ventura River. The federal government has approved removal, but issues about what to do with sediment from behind the dam have stalled the project. Now, as the cost has grown past $160 million, there may not be enough money in the overdrawn federal budget for it.

The Spring issue of Ojai Magazine is available around town now, and contains other interesting stories about the Ojai Valley, it's history and people. Click here to download a pdf version of the complete article.

Previous news and information on the Casitas case: http://www.venturariver.org/search/label/Casitas%20Water