RE: Matilija Coalition Position on US Army Corps of Engineers Proposal to Permanently Sequester Fine Sediments in Matilija Canyon

The Matilija Dam Ecosystem Restoration Project has been delayed by the U.S Army Corps of Engineers (COE) lack of funding and difficulties associated with the management of approximately two million cubic yards of fine sediment (approximately one third of the total sediment) that has accumulated behind the dam since its construction in 1948. The Matilija Dam Ecosystem Restoration Feasibility Study completed in 2004 outlines a restoration plan that includes dam and sediment removal based upon the ‘Alternative Plan 4b’ for ‘short-term sediment stabilization.’ This plan was developed through a multi-year, multi-agency planning process with consensus of all stakeholders including Ventura County, the COE, and the California Coastal Conservancyas project sponsor. The Feasibility Plan underwent the extensive review processes outlined below, and ultimately gained Congressional approval through the passage of the Water Resources and Development Act of 2007 (WRDA07.) 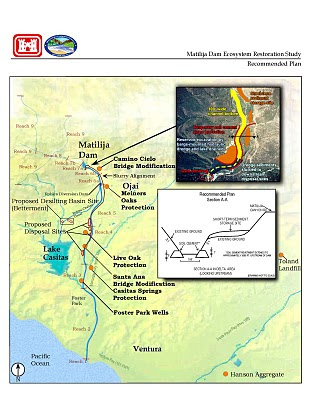 To date, the COE and County project managers have been unable to complete the final design of the Feasibility Plan that specified a slurry system to transport fine sediment downstream of water supply facilities to temporary storage areas near Baldwin Road. Attempts to alter the consensus Alternative Plan 4b to permanently store the fine sediment in a 70-acre landfill within a popular public recreation area understandably met with community resistance. Therefore, project managers are now considering another alternative which would permanently store the fine sediments upstream of the current dam site within Matilija Canyon.

At the January 14, 2010 Matilija Dam Design Oversight Group Meeting, the COE and County project managers asked stakeholders to consider and respond to the following question:

• Can a constructable alternative be developed to permanently sequester the fine sediments upstream of the dam so as to reduce impact to Lake Casitas? If so, what would be the environmental impacts and cost?

The Matilija Coalition DOES NOT support the proposal to permanently store 2.1 million cubic yards of fine sediments in the Upstream Storage Areas (USA 1 and 2.)

The Matilija Coalition believes that the proposal to permanently sequester the fine sediments upstream of the dam in the manner described undermines the basic objectives of the Matilija Dam Ecosystem Restoration Project. Moreover, this will likely result in further delays to the project, which is already several years behind schedule. The upstream storage of fine sediments described by the COE will result in a permanent landfill and associated hardscape flood-control facilities within the high-energy floodplain of Matilija Creek: this proposal represents a significant departure from the consensus Alternative Plan 4b previously incorporated in the Feasibility Study and NEPA/CEQA environmental review, and raises significant concerns, including the environmental, procedural, and regulatory issues outlined below.

1. The proposal is not fully consistent with the Matilija Dam Ecosystem Restoration Project objectives:

2. Departure from the Feasibility Study plan:

The proposal is inconsistent with the project description approved in the 2004 Feasibility Study. This plan underwent an extensive review processes including:

Construction of flood protection structures in the active floodplain raises the potential for future catastrophic failure and the need for ongoing maintenance. Specific concerns include:

The Federal interest in Matilija Dam is based upon a cost-benefit analysis that was determined in 2004 through a modified Habitat Evaluation Procedure (HEP.) Many of the assumptions in the HEP analysis may be invalidated with the Upstream Storage Area proposal:

Summary
The area upstream of Matilija Dam is the primary restoration site in the Matilija Dam Ecosystem Restoration Project, and the ultimate success of the project hinges on how this reach of Matilija Creek is restored and managed. In general, the proposed upstream USA storage sites do not reflect the considerations that led to the conceptual design for upstream sediment management described in the 2004 Feasibility Report. 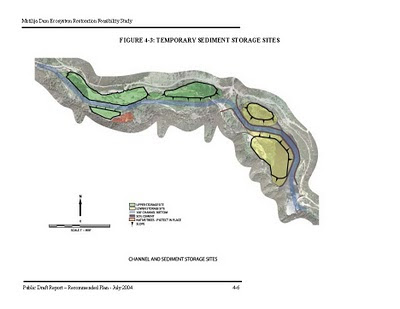 The Feasibility Plan specifies temporary sediment storage areas that were carefully selected to minimize impacts to the existing habitat and provide for the restoration of a naturally meandering stream channel upstream of the current dam site capable of shifting its course in response to flow and sediment transport. This initially restored channel was intended to provide a starting point to provide for the natural evolution of the river within Matilija canyon following dam removal. Constricting this channel between permanent flood control structures protecting the permanent USA storage sites and Matilija Road in this reach of Matilija Creek will compromise this process, which is key to the ecosystem restoration objectives. The proposal is also inconsistent with re-establishing recreational opportunities within the restored Matilija Reservoir site.

The Matilija Coalition remains committed to the removal of Matilija Dam in the most cost effective manner that will attain the Matilija Dam Ecosystem Restoration objectives. We support analysis of restoration alternatives that are consistent with the consensus plan outlined in the 2004 Matilija Dam Ecosystem Restoration Feasibility Study. We also encourage COE and County project managers to re-engage the scientific and technical expertise that initially contributed to the planning process. Experts in the fields of river and habitat restoration, fluvial processes, and fisheries restoration, as well as the resource agencies responsible for the outcome of this project, should all be active participants in this process.

We look forward to moving this project forward in a positive manner toward an outcome that satisfies the concerns of all stakeholders and is consistent with the consensus plan approved in the 2004 Feasibility Study.

signed by representatives from the following organizations: