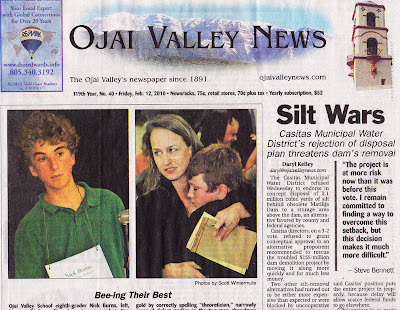 This news follows last week's story in the VCStar:

Disagreement Could Delay Tearing Down Matilija
“The whole point was restoration of the river, which really requires that the natural processes are restored,” said Paul Jenkin, chairman of the Matilija Coalition. “I don’t think this plan is in keeping with that original plan. It is not clear to me what it is going to take to get the project back on track.”

The Matilija Dam Ecosystem Restoration Project has been delayed by lack of funding from the U.S Army Corps of Engineers (COE) and difficulties associated with the management of approximately two million cubic yards of fine sediment (approximately one third of the total sediment) that has accumulated behind the dam since its construction in 1948.

The Matilija Dam Ecosystem Restoration Feasibility Study completed in 2004 outlines a restoration plan that includes dam and sediment removal based upon the 'Alternative Plan 4b' for 'short-term sediment stabilization.' This plan was developed through a multi-year, multi-agency planning process with consensus of all stakeholders including Ventura County, the COE, and project sponsors. The Feasibility Plan underwent extensive review processes, and ultimately gained Congressional approval through the passage of the Water Resources and Development Act of 2007 (WRDA07.)

To date, the COE and County project managers have been unable to complete the final design of the Feasibility Plan that specified a slurry system to transport fine sediment downstream of water supply facilities to temporary storage areas near Baldwin Road.

Attempts to alter the consensus Alternative Plan 4b to permanently store the fine sediment in a 70-acre landfill within a popular public recreation area understandably met with community resistance.

Therefore, project managers are now considering the potential for permanently storing the fine sediments upstream of the current dam site within Matilija Canyon.