Project managers presented the latest proposal for dealing with sediment accumulated behind Matilija Dam. Management of 2 million cubic yards of fine sediments has become the critical issue, since significant problems arose with the slurry/downstream disposal plan outlined in the 2004 Feasibility Study. The 'fines' make up a third of the total sediment, and are concentrated in the area beneath the remnant reservoir. More history of this issue on this blog here.

The question was presented as:

A proposal was presented for consideration by the group, with responses requested within the next four weeks.

This engineering concept involves dewatering the reservoir in order to mechanically excavate the fine sediments. The material would be transported up the canyon where it would be dried out and deposited in 2 storage areas USA 1 and USA 2 (Upstream Storage Areas 1 & 2.) 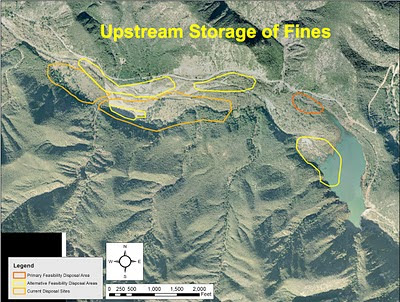 In this graphic, the yellow outlines depict the temporary sediment storage areas from the Feasibility Study. The light orange outlines are the newly proposed permanent storage sites. 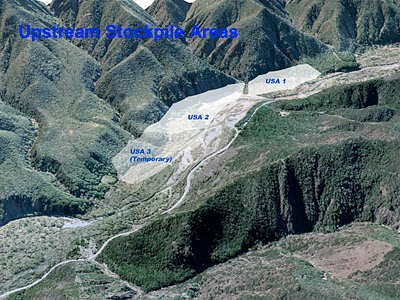 The fine sediments would be permanently stabilized using soil cement revetments (designed for the 100 year storm event), and capped with coarse sediments from elsewhere in the 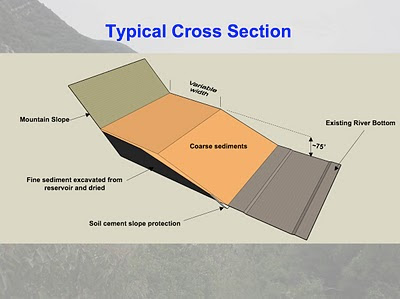 project area. The piles would be stacked approximately 75 feet high against the canyon wall. USA 3 would contain coarser sediments to be allowed to erode over time. Permanent rip-rap protection would also be required on the opposite bank to protect Matilija Canyon Road. (When asked, engineers explained that this is needed since the USA structures will create a permanent constriction in the canyon.)

Once the fine sediments have been relocated, additional excavation is required to re-create a channel through the coarse sediments. This would be managed as in the Feasibility Study, but the exact configuration of additional sediment storage sites was not clear from the presentation. The intent, however, would be to allow the remaining 4 million cubic yards of sediment to erode downstream during large storm events. 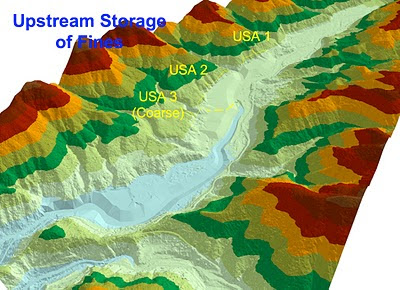 Project managers presented the potential advantages of this concept over the slurry line as shown below: 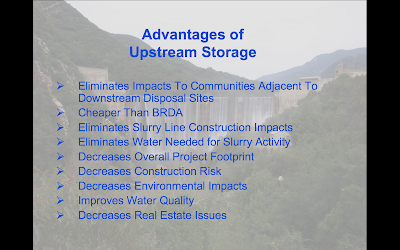 Cost: Surprisingly, this proposal is estimated to cost over $30M, as much as the slurry disposal at MODA. Engineers stated that this is due to the extensive re-working required to dry out the silt. They anticipate turning the material over with bulldozers as many as 40 times, in an earthmoving process estimated to take 2 years.

The Corps presentation Upstream Storage Area Slideshow Presentation from the January 14, 2010 DOG Meeting (January 2010) is online along with other documents at www.matilijadam.org.