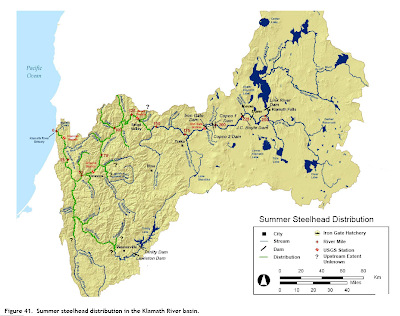 A study conducted by private consultants for four dams on the Klamath River confirms statements from experts convened before the Matilija Dam feasibility study was begun: extreme short term impacts from dam removal will pay off in the long run:

At a workshop convened in Ventura in 2002, a fisheries manager even used the term 'total biological annihilation' to describe the potential downstream effects of uncontrolled large scale sediment releases, and suggested this would be acceptable considering the long-term rebound of a migratory steelhead population.

At the SRF conference last year, the removal of Marmot Dam was presented as one of the first opportunities to see the results of sediment release on a large scale. In that case the river naturally sorted the sediment and salmon quickly returned up the river.

The final feasibility study for Matilija Dam outlined a controlled release of sediment, engineered to avoid impacts to surface water diversions, as the preferred alternative. However, project managers are now shying away from any release of sediment, instead favoring permanent storage of 2 million cubic yards of fine sediments slurried downstream. A similar tact is expected when engineering for upstream sediment management begins. These issues and the dismantling of an open dialog threaten to stall the removal of Matilija Dam.