Letter to the Army Corps of Engineers Via e-mail: Douglas.E.Chitwood@usace.army.mil

During the Design Oversight Group meeting of December 4, 2008, project managers indicated that a decision would be made on slurry disposal (by Feb 2009) based upon the alternatives presented at the meeting. These alternatives are as follows: 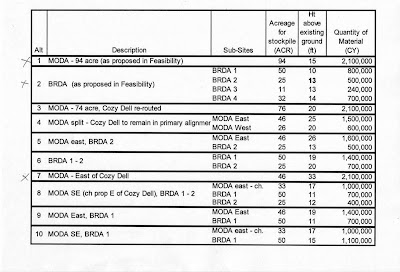 (Click here for more background on the Slurry Disposal)

We suggest that Alternative 6 be modified to reflect the parameters that we proposed in our comment letter of October 20, 2008.

The following is a description of this alternative:

BRDA 1 would provide temporary storage of 750 AF of fine sediments, intended to be completely transported downstream following a series of flood events. This is accomplished by mana 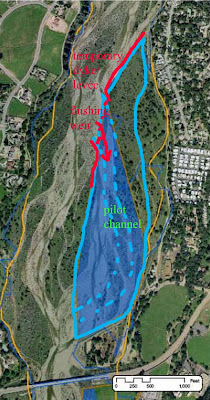 ging a pilot channel that follows the alignment of the existing river side-channel. This pilot channel will direct high flows from the mainstem channel through the disposal area to initiate and actively erode the sediments. This is controlled with a temporary levee (or containment dyke) that includes a ‘flushing weir’ at the upstream end of the pilot channel.

The footprint outlined in blue in this figure includes expansion of the disposal area onto the floodplain terrace to the east of the active channel. This would provide greater insurance that flows would not enter behind the disposal area and threaten downstream infrastructure. This area will also provide a staging area and additional capacity to account for the pilot channel, which would necessarily be an area of lower fill depth.

Adaptive management of this area would include monitoring the containment dyke and erosion to ensure release of fine sediments downstream occurs during predetermined flow events. The weir entry is designed to direct flows into the pilot channel during such events to facilitate removal of stored sediments. In this manner a large flood event may effectively remove a large portion of the temporary sediments (highlighted in blue.) In the dry season following such an event the remaining sediment could be re-distributed within this erosion zone in preparation for the next flood. Eventually this area would return to natural floodplain with little evidence of the slurry activities.

The BRDA 2 disposal area may store 600 AF of sediment (BRDA 2 with BRDA 2A superimposed.) BRDA 2A is a 15-acre sub-area in which the total deposition would average 30 ft deep. 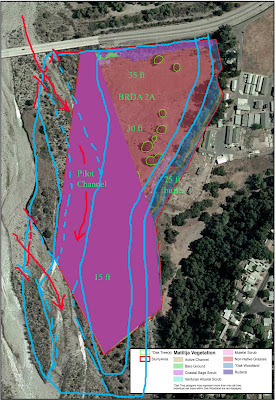 The erodable area (pink) includes a pilot channel designed in the same manner as BRDA 1. The fill is deepest adjacent to Baldwin Rd, which could be used as a containment dyke. The east edge of the disposal area will taper down to leave a 75 ft buffer/channel from the toe of the bluff to accommodate existing flows and maintain the mature sycamore and oak trees. The disposal area is expanded slightly to the west and south to provide additional capacity to account for the buffer zone and pilot channel.

Adaptive management would be used to optimize the erosion of temporary storage areas as described for BRDA1. The upland terrace would be revegetated, but the pilot channel and erosion zone would require minimal restoration. In the future, the BRDA 2A area may be all that remains as a permanent feature of the landscape, so full restoration efforts need only be focused on this 15-acre area.

Other considerations:
It is unclear how the slurried sediment will compress after drying at the disposal areas. Discussion during the December 4th meeting suggested that the material may reduce from 70lb/sq.ft to 150 lb/sq.ft, perhaps resulting in as much as a 50% reduction in disposal height. How this will affect revegetation/restoration is not clear, so adaptive management of revegetation efforts needs to be considered in the planning process.

We submit this concept to clarify our preferred alternative for slurry disposal. We believe that temporary sediment storage, while having a short-term impact, will provide the greatest opportunity for ecosystem restoration and have the least impact on the affected community.