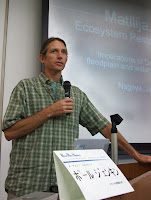 I was invited to participate in a dam policy and field tour sponsored by River Policy Network, Japan (RPN). This was my 3rd trip to Japan to share the experience gained from the Matilija Dam Ecosystem Restoration Project. Over the past several years, RPN has done a great job of bringing scientists, engineers, local and federal government, and community representatives together in these forums on dam management. (I participated in a similar forum in 2005)

The focus of the program was management of aging dams, and included two symposiums (Osaka and Nagoya) and two field trips. Japan has many dams, large and small, which are experiencing typical sedimentation, structural aging, and environmental impacts. The case of Matilija Dam was presented alongside Yahagi Dam and the Akaya Project in Japan. Other presenters elaborated on the impacts of sedimentation on Japan's reservoirs and other environmental effects. 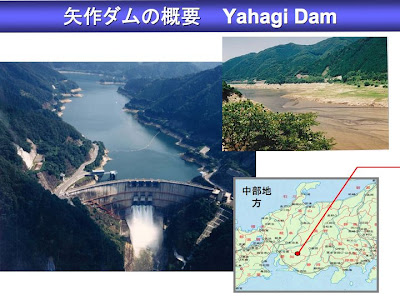 Yahagi Dam is the main dam of several on the Yahagi River, which drains into the bay near Nagoya, Japan. Nagoya is one of the industrial centers of Japan, home to Toyota's global headquarters and several manufacturing plants. The dam operators cite that Yahagi Dam provides over 1.3 million kWh of hydroelectricity, enough to power all of Toyota's manufacturing in the area. 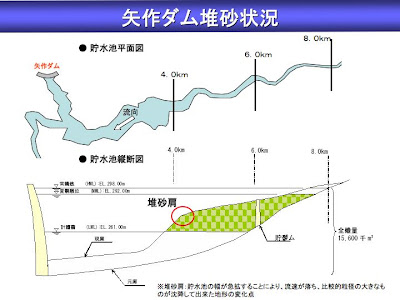 Construction of the 100m high dam was completed in 1971 at a cost of 14.5 billion yen (around $145 million.) Sedimentation has occurred faster than predicted, and today the reservoir is 40% filled with over 15 million cubic meters of sand. This has reduced the length of the reservoir from 8km to 4km, reduced flood control capacity, impacted water quality, and degraded downstream fish habitat for a historic and existing commercial fishery, as well as posed a threat to future energy generation capacity. 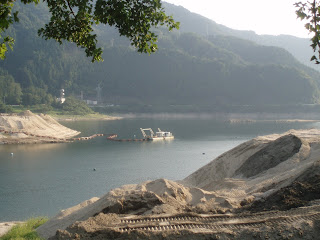 In an effort to offset the loss of reservoir capacity, Yahagi Dam managers have been dredging the reservoir and trucking sand downstream. In one project, 60,000cu.m was transported by truck 96km to the bay, where the new land formed by the sediment deposit was turned into a park. This was very expensive, costing approximately $100/cu.m. Another project trucked sand to a location within the floodplain downstream, where it eroded away during a flood helping to restore river habitat. A project is also underway to truck sand to the bay in an attempt to revive a commercial clam fishery that has been lost due to the shortage of sand in the system. 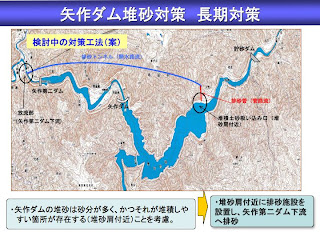 The more permanent solution being considered is a tunnel that will bypass sand from the upstream reservoir delta to the river downstream. The tunnel would be almost 9km long, and would require careful engineering to provide adequate sediment transport at the right time.

Perhaps most significant about the Yahagi River is that it has become a case study of citizen-based action to protect local resources and partially mitigate the impacts of dams. Beginning in 1969, local fisheries and farming 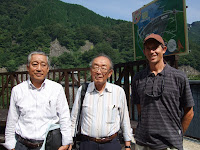 cooperatives organized to solve water quality issues in the watershed. The Yahagi River Basin Water Quality Preservation Association (YWPA) includes agrarian, fishery and local municipalities. In recent years, local fishermen have been instrumental in working with dam managers to improve downstream flows, water quality, and sediment management for downstream fisheries. This is a significant first in a country where complete de-watering of rivers downstream of major dams is common. (Water is often diverted through elaborate hyroelectric and transbasin schemes.) It was a privilege to meet two of the leaders of the Yahagi River Fishery Cooperative. 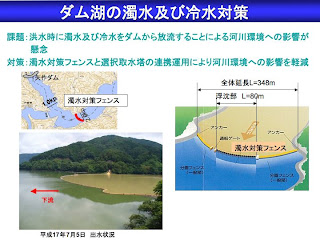 In addition to environmental flows, dam managers, working with the local fishermen, developed a silt 'curtain' to eliminate high turbidity water from the intake structure. This has been effective in preventing fine silt from smothering downstream spawning gravels, resulting in increased fish populations. 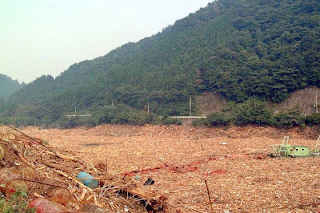 The most dramatic problem at Yahagi Dam is the influx of millions of trees during a large flood event. This is in large part due to forestry practices in Japan after WWII, and the resulting instability of the steep mountain slopes from the non-native timber. The solution in this case was to start a charcoal production business, creating an economic means to clear the reservoir.

Here the tour group is pictured at the charcoal kilns upstream of Yahagi Dam. 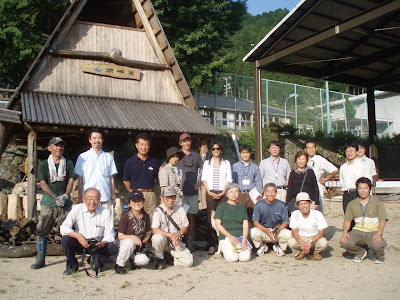