July 7, 2008 According to the Ventura County Star,
"the county could end up paying millions of dollars to residents after a judge ruled Monday that four projects built by the county diverted high water flows from the Ventura River that 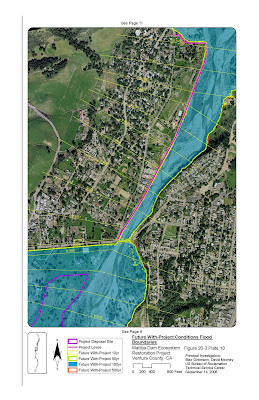 slammed onto the bottom of the Monte Vista bluff, causing erosion and damaging houses...The lawsuit, triggered after a January 2005 storm, was filed by 28 plaintiffs who reside in 13 houses on the bluff in Oak View."

Studies done for the Matilija Dam Ecosystem Restoration Project identified this reach of the river as a problem area. See Hydrology, Hydraulics, and Sediment Studies for the Meiners Oaks and Live Oak Levees - DRAFT Report (July 2007). The Matilija Dam project will widen the Santa Ana bridge and reconstruct the levee, which was also damaged in 2005 storms.

These flood maps clearly show the constriction in the river's floodplain formed by the Live Oak Levee and the 'pinch point' at the Santa Ana Rd bridge. The lawsuit alleges that the combination of four projects caused erosion of the toe of the bluff across from the levee. From 1974 to 2000 the county has constructed the Santa Ana Boulevard bridge, the riprap/levee that protected Live Oaks Acres, a riverside dike and the 2000 Live Oak Creek diversion project. In 2005, Watershed Protection District constructed rock 'vanes' to deflect flows away 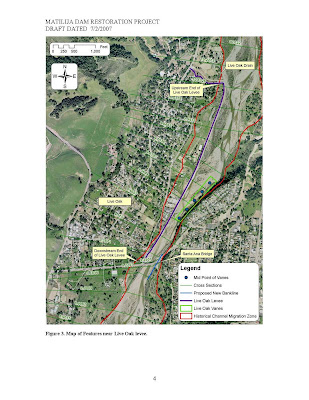 from the bluff. And surely more engineering is in the future.

This case clearly illustrates the 'no-win' situation when trying to control a river within its floodplain. The resulting cascade of public works projects are an ever increased burden on the taxpayer, both in construction/maintenance and damage claims. Costs escalate even further as government agencies squabble over degraded water quality and loss of habitat as dictated by the federal Endangered Species and Clean Water laws.