In March, 2006, rock mining operations at the Ojai Quarry on Highway 33 caused a landslide that blocked the North Fork of Matilija Creek with large boulders and debris. Despite newspaper articles and the involvement of numerous government agencies, the creek remains blocked as yet another winter steelhead migration season begins. 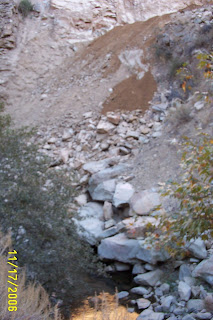 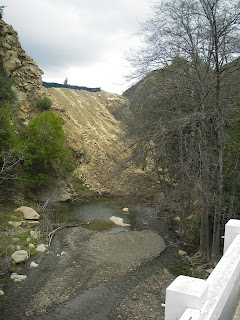 As these photos show, sediment was pushed down the slope to cover the rock slide. As a result, runoff from the quarry discharges fine sediment into the creek during rain events. 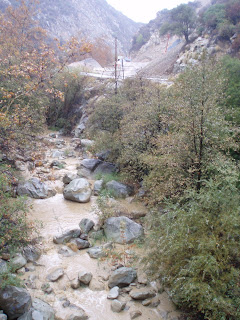 Video shot on December 18, 2007 documents the impacts to the creek. The Santa Barbara ChannelKeeper turbidity meter was out of range downstream (>1100 NTU) , while we recorded average readings of 100NTU directly upstream of the quarry.

This is especially significant considering that in 2006 Casitas Municipal Water District counted 14 adult steelhead trout passing upstream through their new $8 million fish ladder. The fish ladder was constructed in 2004 to allow the endangered trout access to their upstream spawning grounds. Unfortunately, all this effort and expense appears to have been in vain, at least as one can determine from recent events along the North Fork of Matilija Creek.

North Fork Matilija Creek has been identified as the highest quality steelhead trout habitat currently accessible within the entire Ventura River Watershed. And six years of water quality monitoring by the Ventura River Stream Team (a joint program run by Surfrider Ventura and Santa Barbara Channelkeeper) clearly demonstrate that this creek contains the most pristine water throughout the entire watershed. Until Matilija Dam is removed, this endangered species is restricted to five miles of spawning and rearing habitat in the North Fork of Matilija Creek. The blockage at the quarry reduces available stream habitat to less than one mile.

Santa Barbara ChannelKeeper research indicates that the quarry has constantly been out of compliance with the Conditional Use Permit issued by the County of Ventura since its approval in 1995. During environmental review at that time, public objections were brushed aside, citing “overriding considerations” that make this business necessary regardless of the impacts. (The quarry supplies rock for the Flood Control District's streambank hardening projects throughout the county.)

Meanwhile, Ventura County has been awarded of millions of dollars in state funding for “watershed restoration,” both for the removal of Matilija Dam and Integrated Regional Watershed Management. Yet the responsible agencies fail to enforce violations of the quarry's permit, as well as violations of the federal Endangered Species Act and Clean Water Act.